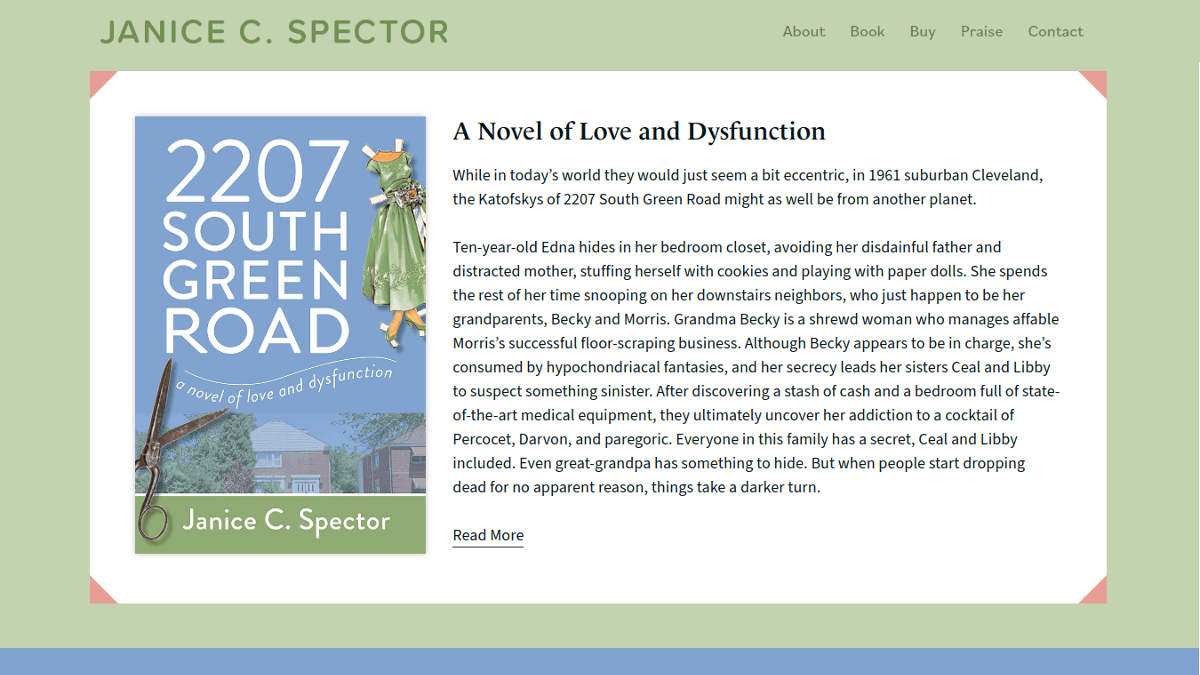 A Novel of Love and Dysfunction

While in today’s world they would just seem a bit eccentric, in 1961 suburban Cleveland, the Katofskys of 2207 South Green Road might as well be from another planet.

Ten-year-old Edna hides in her bedroom closet, avoiding her disdainful father and distracted mother, stuffing herself with cookies and playing with paper dolls. She spends the rest of her time snooping on her downstairs neighbors, who just happen to be her grandparents, Becky and Morris. Grandma Becky is a shrewd woman who manages affable Morris’s successful floor-scraping business. Although Becky appears to be in charge, she’s consumed by hypochondriacal fantasies, and her secrecy leads her sisters Ceal and Libby to suspect something sinister. After discovering a stash of cash and a bedroom full of state-of-the-art medical equipment, they ultimately uncover her addiction to a cocktail of Percocet, Darvon, and paregoric. Everyone in this family has a secret, Ceal and Libby included. Even great-grandpa has something to hide. But when people start dropping dead for no apparent reason, things take a darker turn. Morris’s brother flees town to escape the mob, Becky goes missing, and even Edna tries her hand at crime. Just when the whole family seems like it’s about to go tumbling off a cliff, a shocking event changes everything.

By turns funny, tender, and sad, 2207 South Green Road is a heartfelt story of a quirky Jewish family glued together by love, habit, secrets, and lies during the forgotten years at the start of the Kennedy era.
Read MoreRead Less

“Crisply, perceptively and amusingly, Janice C. Spector burrows into family life and Jewish identity—and puts us in the center of all the mishegoss. Her touch is light, but the takeaways are profound. If you’ve wondered what was really going on in mid-century Midwestern Jewish life, 2207 South Green Road brims with answers.” —Bob Levey, former columnist, The Washington Post and author of Larry Felder, Candidate

“Janice C. Spector’s novel 2207 South Green Road will likely resonate with many people. I am the product of the 1950s and the child of a large immigrant Jewish family, as I suspect the author is as well. Grandparents, parents, uncles, aunts, cousins all trying to thrive in America.

Its 1961, and ten-year-old Edna is just trying to survive her family. She lives with a mother who is distant and a father who should be, for all he cares about her. Her grandparents Morris and Becky live downstairs. Morris barely speaks English; Becky is the quintessential hypochondriac. Her great-grandfather is a poker addict. Uncle Abe is in hock to the mob. Aunt Libby hates her husband Uncle Joe, and Uncle Joe hates Aunt Libby. Then there’s uncles Arthur and Izzie, aunts Millie and Ceal, and all the crazy nieces and nephews, employees and neighbors. Is anybody happy? How does a suspicious, creative, and unliked ten-year-old cope in the middle of all this dysfunction? Espionage.

At 2207 South Green Road, Edna’s family argues, cheats, lies, steals, breaks bread at the holidays, talks behind each other’s backs, and somehow manages to stay together. They love, live and, ultimately, die. Edna is not only the cataloguer of her strange family’s woes but, in the end, the glue that pulls them together.

This novel seems to be autobiographical. It is as if author has lived with all of these people and knows every nuance, every quirk, every secret. She is spot on.” —Peter Clenott, The Historical Novel Society

“A heartfelt story of a quirky Jewish family glued together by love, habits, secrets and lies during the beginning of the Kennedy era.” —Cleveland Jewish News

“I was instantly transported to my childhood in the ’50s, with images of milk boxes on the back porch, Hostess cupcakes, and preparations for holiday dinners. After three chapters, I felt as though I could imagine the characters both physically and emotionally. The child Edna, watching her family’s dynamics play out before her eyes, is both frightening and entertaining. I am afraid for her, but also intrigued as to how she will cope and mature.” —Linda Greenberg, long-time board member of nonprofit performing arts organizations in Ohio

Interview with The Jewish Views
Listen to Podcast »

Janice C. Spector received her first awards for story and playwriting in the sixth grade in University Heights, Ohio. She attended college in Brooklyn, New York, and began her career at The New York Times, where she worked on the foreign and metro news desks. After relocating to Northern Virginia, she focused on political and media consulting. Her last employment was as a speech writer for a U.S. Congressional Committee. Most recently, she was a member of the National Finance Committee for Biden for President. Janice is married and splits her time between homes in Brooklyn and Lewes, Delaware. She is working on her next book, titled Damaged People. When she is not writing, she is Zooming with her grandchildren.

To send a message to Janice, please fill out the form below. Thanks!